Italy is a country blessed and built with world-class craftsmanship.

Soaked with our country’s heritage, we craft tailor-made products, bespoken to our customers’ tastes.

We aim to always be at the forefront of the industry; hence Mariani has long been synonymous with premium quality, tidy design, and exceptional performance.

At Mariani, there is no room for sidesteps, excuses, or compromises.

Who we are. What we achieved

Davide started skating at the age of 8 in the Gipron skating club located in his hometown Cantù (Lombardia-Italy). After clinching average results through his Junior years, he makes a big step up when turning Senior. He earns his most significant victories when becoming a National and European Champion and competing at the World Championships with the Squadra Azzura, the Italian national team.

As the marathon scene grows in the early ’90s, he clearly establishes himself as one of the world’s best, winning significant events such as Rennes Sur Roulettes, which would then be a World Inline Cup stage in the late ’90s.

1997 | Marianiskates is born. Beginning of a success story

It all began because Davide needed a pair of custom boots, given the ones he was skating on weren’t meeting his needs. Since he could not afford to pay for new ones and could not find anything good enough in the market, he decided to make his ones. Together with his father and brother, they made the first pair of Mariani custom boots in their garage.

The collaboration with Salomon started thanks to Christophe Audoire (French coach). The year before (1996), Arnaud Gicquel (at the time coached by Audoire) raced at the World Championship with a pair of Mariani boots, clinching a good silver medal. Salomon planned to build up a PRO TEAM and was looking for athletes, coaches, and suppliers. Upon Salomon’s request, Davide drove from Milan to Paris to meet up with managers. Going back and forth took 2 days, but it was worth it. It was the beginning of a fruitful collaboration, marked by countless victories and domination of the PRO TOUR for about a decade. Both brands took benefits from the golden age of inline skating. Professionalism/R&D/Media exposure: nothing was missing!

The whole concept was based on two things: Lightness and Resilience. Mesh appeared to be the best fit. In addition to being indestructible, it offered excellent traction resistance, and we could make inserts as well. At the time, we didn’t have the experience yet, so everything was sewn by hand. Thermal bonding wasn’t available, which made the hemming of the upper time-consuming.

2001 | The first-ever Inline speed skate boot with a 360° closure system is born: RINGTECH

Our athletes were asking for a boot that would wrap the foot instep as much as possible. At the time, most boots on the market featured a simple lace cover, and 45° buckles did not exist, so we had to think about something out of the box. We came up with something quite forward-thinking and efficient. We designed a strap that went around the entire foot arch. It was pretty user-friendly, efficient, and durable. It radically enhanced the skate handling, and the skaters appreciated the idea. Since then, we have always paid great attention to making boots that perfectly wrap the foot and offer a snug fit. Not only because it provides better comfort and handling, but more importantly because it significantly enhances performance and the skater’s experience.

We have always considered Maple and, in particular, Johan Bennink as an innovator. After distributing their products for years, we thought of adding a frame to our product range. Our focus was always on peerless quality, and so Maple was the perfect fit for us. We engineered an entirely CNC machined frame, providing high responsiveness while being lightweight and offering easy handling. Together with our boots, it allowed us to provide a full package that we knew was unrivaled. 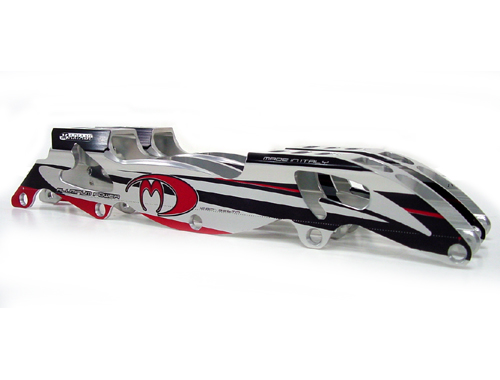 The concept was an evolution of RingTech. The goal was to improve the foot lock further. We engineered a dual closure (instep + ankle), which offered a seamless wrap and a more efficient lock. We developed the system in collaboration with Team Salomon and, for years, has been a hallmark of our models.

The brand that has created the sport in the early ’80s had dominated the market and the racing scene for about 2 decades. Seeing with interest the skyrocketing growth of Salomon in the early ‘2000s, Rollerblade had decided to team up with Mariani in a bid to beef up its Speed and Marathon lines in terms of quality, engineering, and overall appeal, to challenge what had become its biggest competitor. The collaboration would shortly prove to be successful and long-lasting. Almost 20 years on, both brands are still working together. Mariani takes care of Rollerblade’s flagship model engineering and manufacturing, the Powerblade, and oversaw the revolutionary Endurace/E2 marathon skates’ engineering process in the late years. 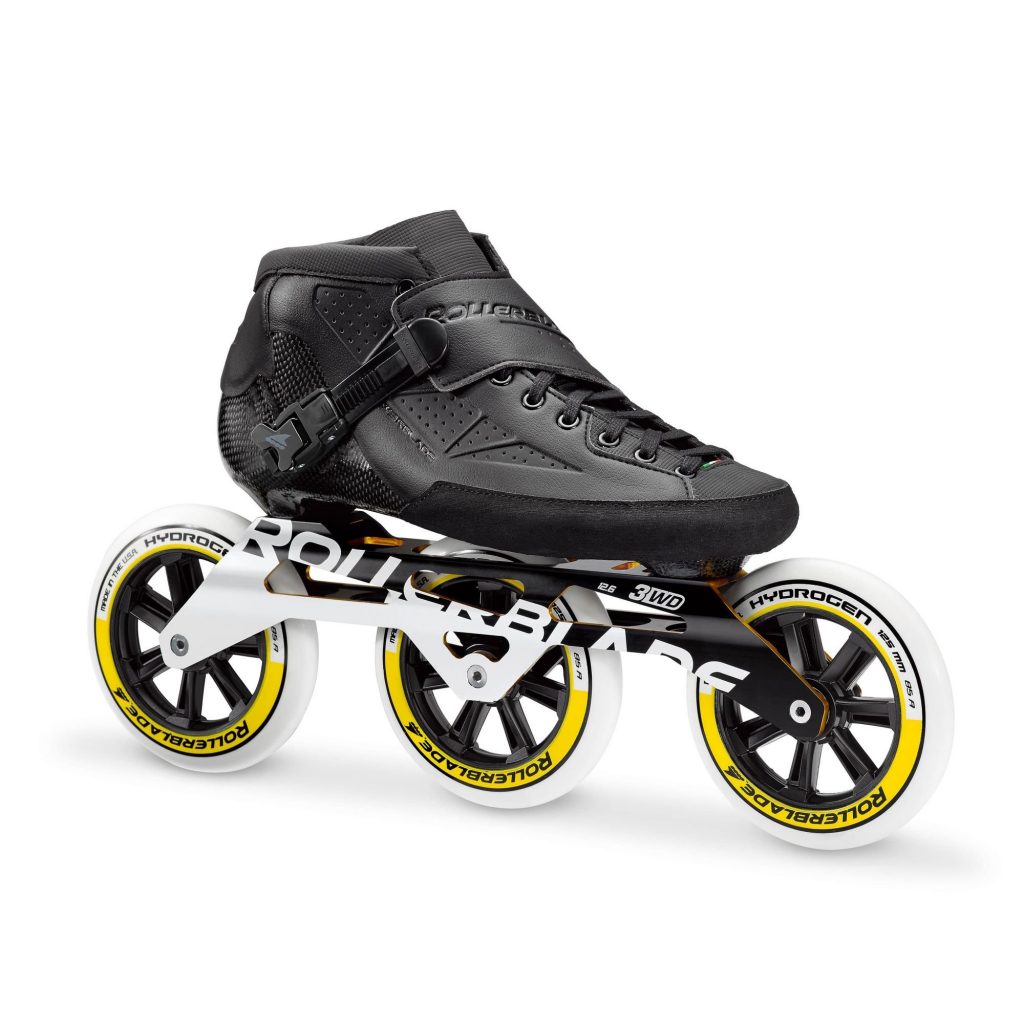 What a day! At the time, the team members were underdogs. In Basel (Switzerland), the race was held on a pretty hilly course, with the last stretch being up the bridge across the Rhine river. Stefano Galliazzo surprisingly came in first at the bottom of the hill with little chance to win. The peloton was right behind, with all sprinters being led out by their “trains” and chasing him down. Stefano made it to the top of the hill in a sprint of unbelievable bravery and crossed the finish line first, exhausted. It was an incredible feeling for the entire team, given that the victory was unexpected, especially that way. On occasions, Stefano went close to winning a World Inline Cup stage and finally made it unexpectedly, showing his raw talent. 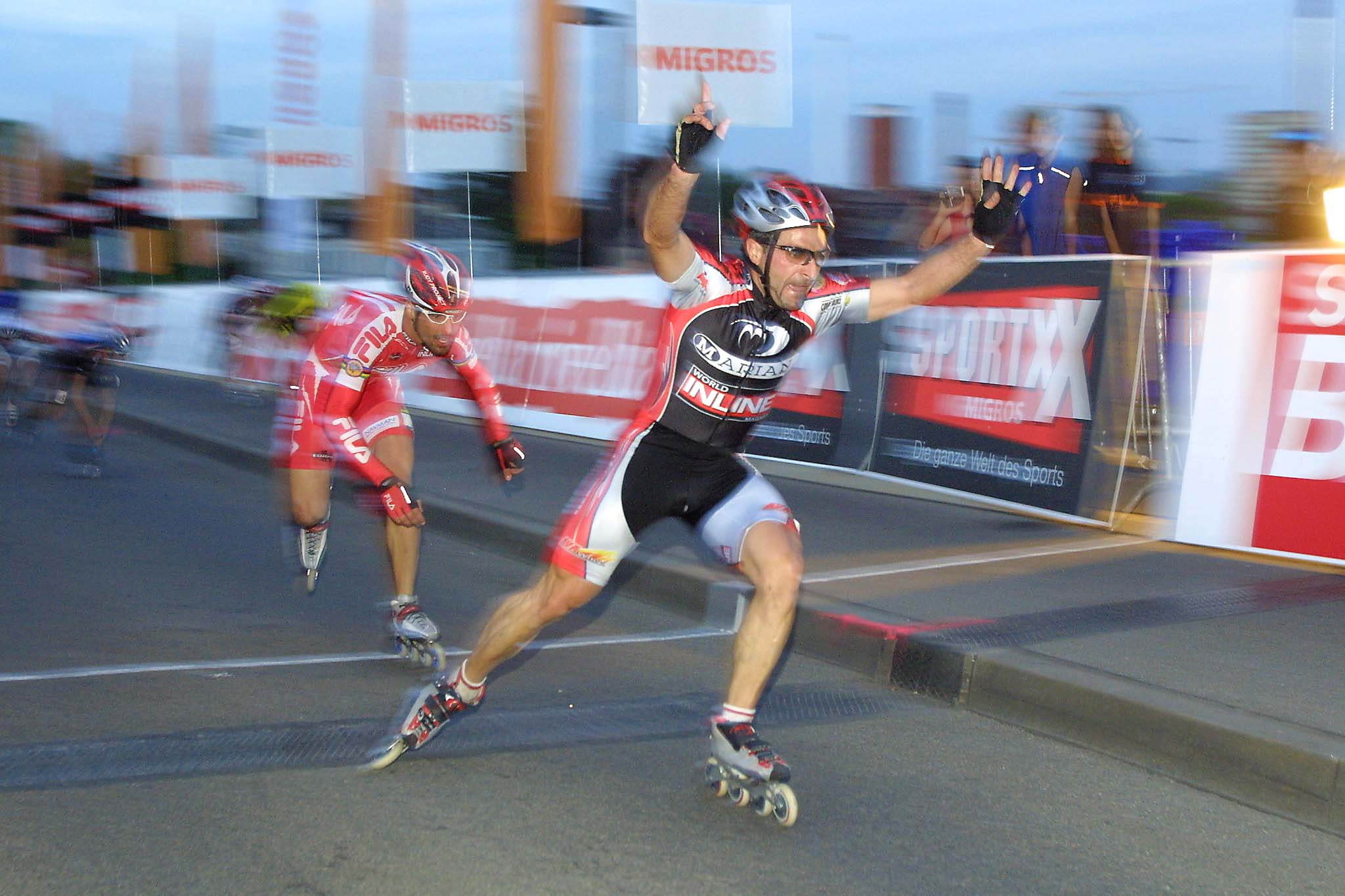 In that year, the World Championships were held in Anyang, South Korea. Following a stellar start to the season, clinching 3 titles in 3 races at the European Championships in his home country, Patrizio Triberio, the team sprinter, was amongst the favorite for the 500m both on the track and the road. After falling short of making the 500m final on the track, Patrizio made it to the last round on the road. Last off the start; he would take the lead by overtaking all 3 opponents in the second corner and would keep it until the end in incredible fashion and become the first-ever World Champion of the Mariani team. Patrizio paved the way for the likes of Alex Cujavante etc.

Following the WRC that Patrizio Triberio used on his way to its World Champion title, we decided to come up with something disruptive and unseen at the time. The boot aimed to be unrivaled in engineering, but the whole thing was to make something unique in aesthetics and manufacturing. The core of the project was « less is more.» We shaved everything down to the minimum to maximize performance and design pureness. Looking back at it, we can easily say that the approach was much like what car makers do with their supercar manufacturing. The DOGMA was a true masterpiece, a blend of a brand new shell manufacturing process (making the boot unbelievably light), minimalistic upper, and an all-new approach to padding and overall comfort. From the start, the boot outperformed any other boot in the marketplace. In only a few months, the boot was ready to be used at the highest level. On the DOGMA maiden race at the World Championships in Gigon, Spain, Yann Guyader clinched the World Title. It seemed to be a great start to the product life-cycle and was the beginning of a decade of dominance.

For years, most industry players kept their product line unchanged. The status quo had taken the edge over real innovation. In the meantime, although the DOGMA was being unchallenged, we worked on bringing something even better to the market. He kept an eye on cycling and realized that the whole industry moved away from the traditional buckle-instep flap-toebox strap closure toward the Boa fit system. It was clear that inline speed skating would be no exception and that the Boa fit system would be the game-changer. The EGO PRO was born. To date, no other inline brand has managed to nail it with any dial system and get close to the EGO PRO custom fit, and none has received approval from BOA to use its system. Once again, this is proof of our seriousness and manufacturing quality. 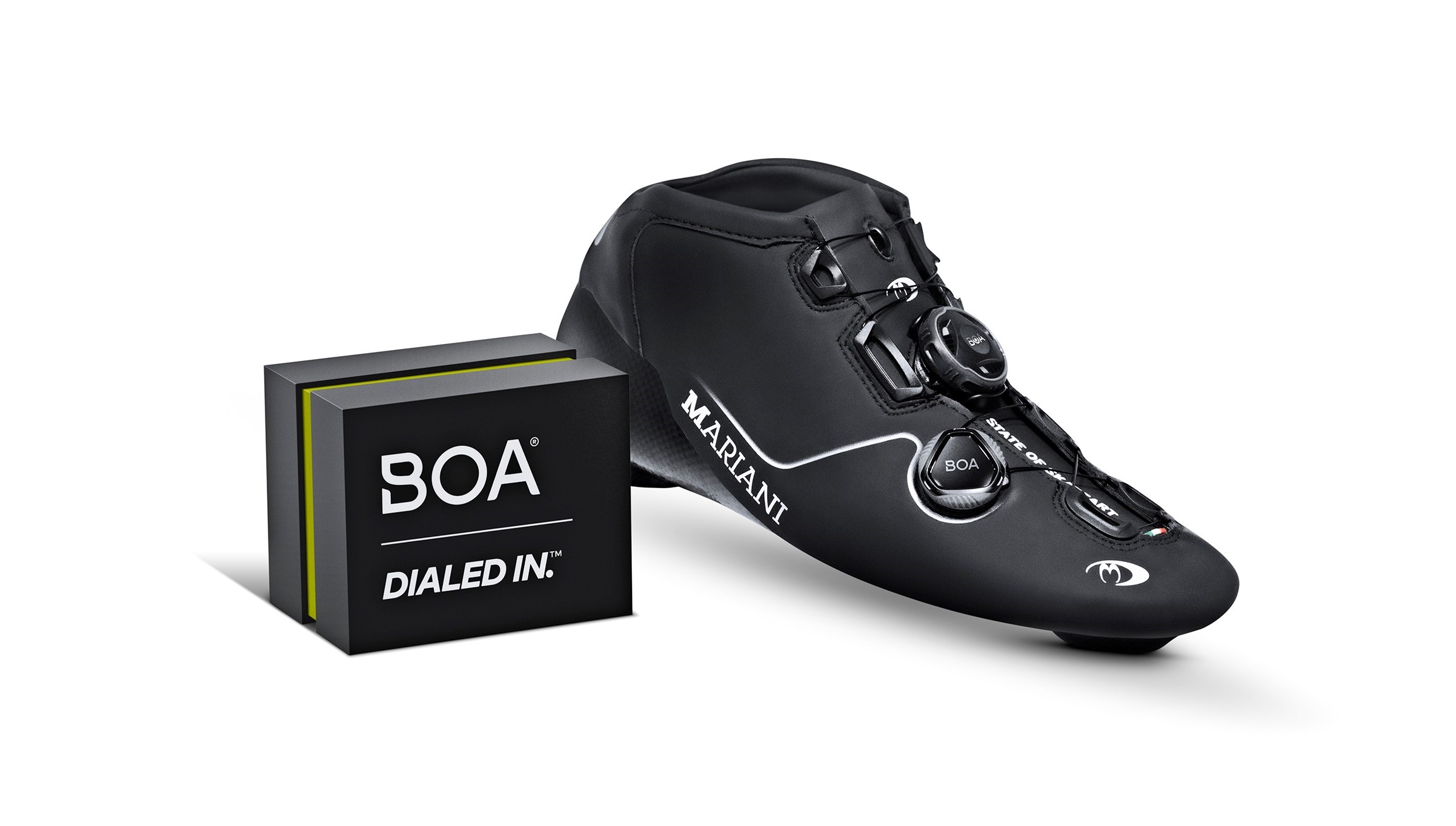 As most industry players understandably decided to put new projects on hold for about a year, we keep our momentum and will release several new models in the months to come.

There are no reviews yet.